In approaching nine years of serving on the board of World Pulse Jessica Robinson is taking on the role as Board Chair. This is a critical time for women globally. Along with the Powershift Inclusive Excellence (PIE) Steering Committee, and members of our magnificent Community of 75,000 + individuals worldwide, we look forward to advancing the values and strategy of World Pulse.

“World Pulse must be safeguarded as an online sanctuary for women’s voices and our community celebrated as the igniter of hope, love, and collective power that we are. These values are urgently needed to shift humanity to sustainable systems and achieve gender justice because the world’s women and gender-diverse continue to experience the brunt of the economic downturn, social unrest, and overlapping pandemics of COVID-19, violence, and mental health suffering.

We must remain focused on intersectional solutions during this time of profound insecurity. Recent data shows that more than half of young women online globally are experiencing cyber harassment; in addition, domestic violence has increased exponentially in every country worldwide,” says Robinson. 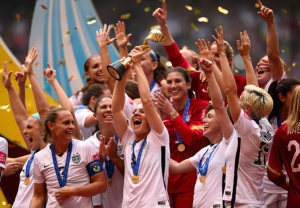 Risk Mitigation: Why Soccer Is a Lot Like Security

I grew up watching the U.S. Women’s National Soccer team. Part of the reason is because I played soccer ever since I was four years old. The other reason is because it was truly my first love. I went on to on play division one soccer and now I own a security company that provides affordable outsourced Chief Security Officer services to start ups, small and medium sized businesses and nonprofits. I find as to continue grow my company, watching the women’s national team play means more to me today that perhaps fifteen years ago. Here’s why:

1. Leadership: Leadership important in any sport, but it’s incredibly important in a team sports. The leader is not only the coach, but also the caption and other people on the team that influences the behavior of others in a way that positively benefits the team.

As a leader, and owner of a company, in an industry where tough decisions often need to be made quickly, having the best people around me to provide the right information is critical. And when providing information to others I am aware of how the information I provide to clients affects decisions they make about their company and their budgets. Like in soccer, every CEO needs the right leader to help influence the right behaviors on their team. In this case, having the right safety & security partner to help them influence the correct behaviors of the people around them, through education, can help to positively influence company culture.

2. Teamwork: Soccer creates a sense of belonging, which is a basic human need. Soccer is a team sport, so naturally people are working together for a common goal. It’s also the coach that helps the team to understand what it means to lean on each other and put the team ahead of himself or herself.

I will never forget in high school playing in a playoff game against our rivals. That year, my senior year, I was MVP and in this game we went into overtime, and then into penalty kicks. This happens when the game continues to remain tied and penalty kicks are the last resort tie-breaker.
Each team can choose five people to take penalty kicks at this point in the match.

I was one of the five chosen for my team and I was up first. I made a penalty kick earlier in the game, and I was confident I would make it again. I went to the ball, looked at the goal, the goalie and then the ball. I took a few steps back and got in position to kick the ball. As I started take my steps towards the ball, I lifted my right leg, hit the ball and followed through with my leg in the direction I wanted the ball to go. I soon heard the other team screaming. I missed the shot! I couldn’t believe it. Heartbroken, feeling like I let the team down, I walked over to sidelines in tears.

The game went on and each player for my team, and the other team, went on to take their shots. It was agonizing to watch 9 people take shots as the match continued. Every single one of my teammates made their goals, and as a result, we won the game! It was an incredible reminder of the importance of team work and putting the team ahead of oneself. I may have been MVP of the season, but all of my teammates (including our goalie) that made their goals were MVPs to me. They had my back and I had their back, and it felt good!

Soccer creates a sense of belonging thereby making sure your basic human needs of connection are met. Soccer, like security, takes teamwork, and provides for a company’s basic needs – data protection, physical security and threat mitigation.

3. Threat Mitigation: Some soccer teams have someone that will go “Carli Lloyd” all over you! This is in reference to her incredible hat trick (3 goals in the championship match against Japan – all in the first sixteen minutes of the game). Lloyd and the team went out quickly on the offensive attack as part of their threat mitigation plan against Japan. Japan plays very offensively, and the U.S. team knew they had to play that way if they were going to have a chance against Japan.

In security, part of threat mitigation, is having a plan in case something unexpected happens and it’s about being preventative. The USA’s plan of scoring in the first three minutes, and subsequently to keep scoring, was part of the preventative, and offensive, plan to outplay Japan whom they lost to four years ago in the World Cup Final due to penalty kicks. Well, their plan worked!
Similarly, every leader has to have a preventative or risk mitigation plan for the unknown natural or man-made disasters that could strike at any time.

Leadership, teamwork and the threat mitigation plan employed by the U.S. Women’s National Team coach is how the sport of soccer can be similar to security. No matter how large or small your company is ask yourself: do I have the right safety and security person on my payroll? Do I have the tools to create the security culture I want so my team has my back? Do I have the right threat mitigation plans in place in case something unexpected occurs? And, will my clients still trust me if something unexpected does happen?