When we do speak our TRUTH, sometimes we repel those that are closest to us, and we attract those that we hardly know. Either way, it allows us to get closer to ourselves. Closer to what we desire. Closer to a deeper TRUTH that is only revealed to us when we see things in a new perspective.

I’m honored to be able to work with some of the most incredible individuals that I know. Whether they are an executive at a large company, owner of a small enterprise, or a leader in a nonprofit. These individuals all have one thing in common: they are Consciously Secure Leaders (CSL).

It’s about understanding that in living life to the fullest is about assessing the risk, but never at the expense of professional, personal, or soul growth. The security that they value is one that gives them greater freedom in their lives.

But it takes looking at the TRUTH to get there.

Where are you not looking at the TRUTH within your own business? How are you going to actually make 2021 a different year for your team, for your clients, for your other stakeholders, and for YOU.

I invite you on a journey with me this year to dive deep as we explore what it means to be a CSL and how you can protect your business while focusing on safety, inclusion and love.

To kick-off the year, join us for our Cybersecurity Roundtable on January 13th, diving into the Solar Winds attack, or our Consciously Secure Leadership Series event on January 27th where we dive into the 6 Fundamental Skills Business Leaders Need to Learn from Spies and Special Ops with the incredible Alana Winter Founder and CEO of Mi6 Academy. See below for both events.

Jessica Robinson is CEO of PurePoint International and works as a Virtual/Outsourced CISO to middle market businesses in financial services and insurance. Jessica and her team specialize in working with companies with start-up – $350M in revenues.

YOU’VE BEEN HACKED: HOW DOES YOUR FIRM RECOVER? 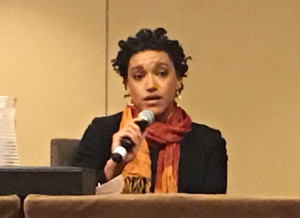 I was honored to be feature in this ACEDS article. Please see the full article below.

This week, intelligence agencies have told the White House they now have “high confidence” that the Russian government was behind the theft of emails and documents from the Democratic National Committee. The breach was a high-profile embarrassment for the organization, forcing DNC chair Debbie Wasserman Schultz to resign. But it is only the latest sign that many organizations are vulnerable to a data breach.

Recovering from a data breach is a technical question. But it is also an ethical, practical question. For example, what is your duty to make your clients whole? How do you repair your reputation? And how can a law firm or business protect against financial losses following a hack? … Click here for full article.

Brussels Attack, Another Western Soft Target Hit: What You Need to Know

Anytime I hear of a terrorist attack, whether it is in Nigeria, Turkey, Syria, or a western country, as a security practitioner, researcher and peace advocate, it is hard to digest. I immediately think of mothers, fathers, sons, and daughters who will never return home. Today, to hear of the terrorist attack in Brussels, it had a personal impact because it was the first city I visited in Europe many years ago. Brussels was where I had my sweet sixteen birthday party.  I was there playing in an international basketball tournament representing the United States. It was an incredible experience to visit Brussels, then Paris, for the first time as a teenager. I loved interacting with young girls my age and exchanging gifts before each game as a symbolic gesture of honor and respect, something we never did in the United States. I loved my time there and I could remember was how peaceful I felt. It also solidified my love for travel. That memory is very different from the experience Belgians had yesterday where 34 people were killed, 214 wounded, and dozens are still missing. ISIS has claimed credit for the two attacks: one at Brussels International Airport and another on a subway car near the European Union.

The truth is no law enforcement department, or physical location, can have enough security guards, gates, technology or guns to stop terrorism. The only foreseeable thing the government can do is implement community programs that engage the Muslim community to weed out extremists, in a collaborative way, and to intercept information early on though human and signals intelligence.

Currently, the top concern by western leaders in Europe and the U.S. are copycats. At the moment, federal and local counterterrorism officials state there are no credible terrorist threats on American soft targets. There are airports around the country that are on high alert as well as cities such as New York City and Washington, DC. Through there was increased security in Europe as a result of the recent capture of Paris terrorist attacker, Salah Abdesalm, in Belgium on Friday, Belgian counterterrorism officials had no hint to a specific threat.  In the U.S., there has been an activation of extra resources such as the National Guard in New York City, use of vice teams, special advanced screening technology, radiation detectors and bomb sniffing dogs. The Department of State has added travel alerts for Americans traveling aboard.

There is no 100% answer to keep anyone safe, but here are a few tips to help you respond in case of an emergency. Below is a list of the top three things businesses can do to protect themselves and the top three things individuals should be aware of when in public transit locations:

Top 3 things for individuals to be aware of:

Top 3 things to know for businesses: