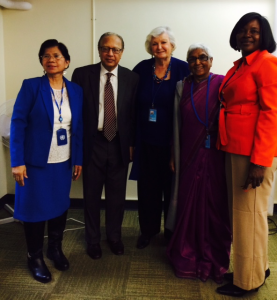 Panelists and attendee at the Challenges in Education for Gender Equality and Empowerment presentation with Ambassador Anwarul K. Chowdhury (second from the right).

CSW59 and a Presentation on Gender Equality and Empowerment

Last Friday afternoon, March 13th in a Salvation Army basement near the United Nations the World Congress for Curriculum and Instruction (WCCI) gave a presentation titled Challenges in Education for Gender Equality and Empowerment: Voices from India, Nigeria, Philippines, Turkey and USA.

The goals of the panel was to discuss the challenges facing women in five countries and, more importantly, highlight the progress women educators have made in the education and empowerment of women and girls. Each of the speakers shared research about gender issues unique to his or her nation as well as personal success stories of how those issues were addressed and integrated into society. The attendees were equally diverse in nationalities and engaged in each of the panelists’ findings.

The seminar was one of many presented as part of the 59th session of the United Nations Commission on the Status of Women (CSW59). CSW59 falls on the 20th anniversary of the Fourth World Conference on Women and adoption of the Beijing Declaration and Platform for Action. In 1995 the Beijing Platform for Action identified 12 critical areas of concern. The purpose of each CSW59 conference is to address the challenges and advancements made in those areas of concern facing women’s equality.

The first panelist to speak at the Challenges in Education for Gender Equality and Empowerment seminar was Mr. Ihab Judeh from Jordan. Mr. Judeh spoke about violence against women in the Middle East, and more specifically, honor killings. He is a doctoral candidate at Alliant International University where he examines the legal and political responses to gender equality in the Middle East. His honor killings case studies focused on Jordan and Turkey. Mr. Judeh stated that the challenge to outlaw honor crimes is rooted in widely accepted but antiquated Islamic and cultural customs.  Honor crimes often include the killing or maiming of girls and women who are suspected or accused of sexual relations outside of marriage, dating, or having a boyfriend. Such acts (or accusations) bring shame to the family who feel that the killings are justified. Honor crimes are difficult to track because most acts are recorded in the courts or at police stations as a suicide or as a regular crime. Mr. Judeh’s colleague, Dr. Saba Ozyurt, at Alliant University was scheduled to join the discussion of gender-based violence in the Middle East; however, she was not in attendance due to illness.

The second panelist was Mrs. Sudesh Ahlawat from India. Mrs. Ahlawat’s enthusiastic speech discussed the progress that her college, BBK Dav College, and tireless work in the empowerment and education of girls has made on gender equality challenges in India. The college provides research opportunities, prepares and supports women in leadership positions, establishes counseling for women, and evaluates gender equality for both men and women at all levels of employment. She shared stories of female BBK Dav graduates and the leadership roles they play in business, government and their communities. Furthermore, Mrs. Ahlawat has worked with the ethics body of India’s Ministry of Education on gender sensitivity training.

Dr. Remedios Naludasan-Abijan from the Philippines was perhaps the most vivacious speaker at the seminar. Her enthusiasm for educating women and society through community engagement was demonstrated by stories of the students she taught and the impact they made on women in health, education, the environment and poverty in some of the most remote countryside villages. Although the mentality that “girls will just marry, so no need to educate them” still exists in the Philippines, Dr. Abijan pairs the U.N. Millennium Development Goals and the Beijing Platform for Action to tackle gender equality concerns.

The next speaker was Professor Lilian-Rita Akudolu from Nigeria who shared her expertise on the retention of female students in university education. While her research observed trends in most countries in Sub-Saharan Africa, her case studies specifically focused on Kenya and Nigeria. Professor Akudolu’s focus was getting girls interested in sciences, providing welfare support services to help intervene when young women are at risk of dropping out, and providing social mentorship to help girls progress to college. Not surprising, the university admissions tests are skewed towards higher socio-economic communities. In Kenya affirmative action has only marginally helped women pursue a higher education. Finally, Professor Akudolu believes that cognitive restructuring technique will help peers recognize female education inequalities and change the negative views of girls in school.

The final panelist was Dr. Joyce Pittman from the United States. Dr. Pittman’s presentation centered on the social action to increase access to resources, and reduce poverty for women and girls. She highlighted critical issues including violence against women, low-income, cultural diversity, and lack of childcare for working mothers, health, education and generational problems. She started her presentation with the advancements the U.S. has made in gender equality but was quick to emphasize ten important pieces of legislation now posing a threat to those improvements: Social Security Act (most elderly women rely on Social Security as their only means of income); Roe vs. Wade; Violence Against Women Act; Affordable Care Act; Equal Pay and Title VII of the Civil Rights Act are just some of the risks facing women’s equality today. Dr. Pittman concluded her speech by affirming the difference between “helping” and “empowering.” She believes that helping a woman will only lead to a dependency, and hence unable to break the equality imbalance. On the other hand, women examining their own issues and determining a course of action to address the challenges can only achieve empowerment.

The conference attendees had a brief opportunity to ask the panelists questions prior to the conclusion of the event.

CSW59 will conclude on March 20th. To locate and attend other seminars, click here or here. 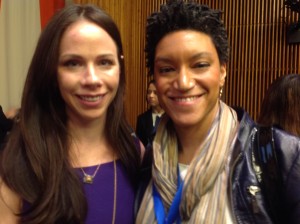 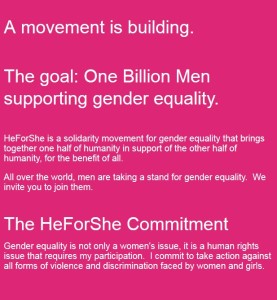 No Country Has Reached Gender Equality says UN: The under-representation of women in decision making and violence against women are a “global phenomena,” said the head of U.N. Women, Phumzile Mlambo-Ngcuka.

Wanted: One Billion Men: March 8 is International Women’s Day, and I am asking all the men I know to support gender equality and urge their friends to as well. And I ask all the women I know to share this message with the men in their lives. To learn how you can #SupportHeForShe visit    http://www.unwomen-usnc.org/heforshelanding or http://www.heforshe.org/#take-action. Please share with your friends.

PurePoint International is committed to promoting global peace and social justice through education and collaboration in the area of global security as it relates women, private sector, and international organizations. Our four areas are: Security, Humanism, Leadership, Partnership.

Jessica Robinson is an International Safety & Security Advisor for PurePoint International and speaker and frequently publishes on the topic of gender equality and gender based violence. To learn more about her work and company please visit www.the-purepoint.com.

Meet the Newest Member of the Team! 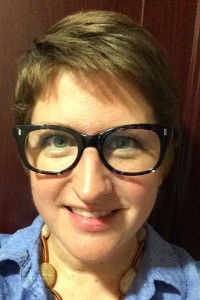 Erin Wolfe is an analyst specializing in national security and intelligence, terrorism organizations and movements, and the role women play in conflict. She is specifically focused on the Middle East and North Africa and the politics and security challenges facing the region. She spent time in region studying Arabic and immersing herself in the culture.

Prior to joining The PurePoint, Erin was a police officer for the New York Attorney General’s Office where she investigated a variety of white collar, civil rights, and labor cases.  Erin also worked at the Manhattan DA’s office, in an international white collar crime bureau.  Beyond her public service, Erin spent almost ten years in the for profit world at Morgan Stanley, primarily in the Information Technology division.  Erin was focused on both IT security as well as business analysis for the firm’s lending products.

Erin’s passion for foreign relations and national security issues led her to complete a masters degree from Johns Hopkins University School of Advanced International Studies in Washington, DC, concentrating on Strategic Studies (the school’s security studies program).  Her undergraduate degree is in music as a cellist from West Virginia University.

When Erin is not tackling security issues, she is traveling the world, diving, cooking or mixing cocktails for dinner parties. She lives in Brooklyn with her wife, their two crazy animals.

Tell Us What You Think

I got into an dialogue with a woman from Iran who works in government and at the university level in crime prevention in Tehran. She asked a number of people, including myself, “What should be done about violence against women, how should men be integrated into the education and what would you suggest for implementation initiatives in a very traditional society?”

I addressed the last part of the question regarding implementation (below). What would be your response to these questions?

These are questions with no easy answer. A multidisciplinary approach is needed. To answer your last question of what implementation is best in a traditional society, I think it starts with focusing on social norms at the community level. Understanding the way men, women, girls and boys view women/girls and the role of women/girls in society. For example, asking questions like: do women/girls deserve an education? If so, up to what level? What is the role of women in family? When should a woman be married? In a traditional society, it’s possible to receive very traditional answers to these questions.

Empowerment programs for girls are wonderful, but if only one gender is engaged in the process the society can’t evolve. Therefore, the next step would be questioning and challenging those social norms. How does this happen? It starts with female and male community leaders – tribal leaders, spiritual leaders, council or political leaders and, of course, parents leading conversations in on this topics to help facilitate an evolution in thinking about the way women are perceived. It also means offering a different perspective on the role of women/girls in society.

The third step is changing those societal and social norms in an authentic and organic way via open dialogue, programming, education  with an understanding it may take years for these norms to change. Also, set up measurements and evaluations, to measure progress. Depending on the laws in the country, it would also mean advocating and collaborating with the government to change laws that no longer fit within the society.